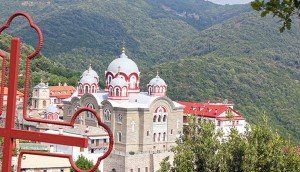 Mount Athos is located on Halkidiki’s easternmost and most beautiful third peninsula, which is known as the Peninsula of Athos. It is known as the Holy Mount because it is the only site in Greece dedicated entirely to prayer and adoration of God.

The Holy Mount, also known as Mount Athos, is roughly 50 kilometers long, 8 to 12 kilometers wide, and spans about 350 square kilometers.

The Spirit of Mount Athos

The monastic city’s boundaries are defined on the ground by an imaginary line that runs from “Fragokastro” on the west coast to the point “Arapis” on the opposite side. The peninsula’s natural splendor is breathtaking.

Mount Athos, which dominates the area, is a massive cone with a height of 2.033 meters. Its bald summit, which appears to pierce the sky, and its slopes, which are densely forested, offer the region a distinct natural beauty.

Mount Athos is a self-governing Greek sovereign region. It is under the Ministry of Foreign Affairs in terms of politics, but the Ecumenical Patriarch of Constantinople in terms of religion. It has been split into twenty autonomous regions.

Each area is made up of a main monastery and a few smaller monastic communities (hermitages, cells, huts, seats). The monks in all of the monasteries are communes, which means they share a common liturgy, prayer, lodging, board, and work.

The monastery is led by the Abbot of the monastery, who is chosen for life by the monks. The monastic Abbots are members of the Holy Assembly and have legislative authority.

Today, Mount Athos is made up of six different types of monastic foundations: monasteries, skites, cells, cottages, seats, and hermitages. The number of monasteries is twenty, which cannot be raised or lowered.

The Skites are monks’ homes that have been established in the vicinity of a monastery. A Monastery Act is used to establish the monastery, which is then approved by a Patriarchal decree. The Act of Founding specifies the number of monks to be appointed.

The Mount Athos Cells are foundations with a single temple and a structure consisting of cells and auxiliary rooms. The Old-Man is in charge of the cell, and his servants are the others. There can’t be more than nine monks in the group.

The huts are tiny, secluded dwellings for two or three monks that have been given to them for life by the monastery that owns the land. The monks in the huts rely on their handiwork to survive.

Small cottages with only one monk serve as seating. The monk is given a seat by the monastery. He lives there for the rest of his life, taking only the most basic sustenance, known as coumbana, from the monastery.

The hermitages have a limited number of seats. They’re in remote and hallowed locations, sometimes on rocky outcroppings and difficult peaks, and other times in caves and clefts in the rock where monks build their impenetrable refuges. They study the testaments and the phenomena of death while fasting, staying up, and praying nonstop.

Any Greek or foreign Orthodox Christian who wishes to visit Mount Athos must first get in touch with the Pilgrim Bureau in Thessaloniki (+30 2310 833 733) or Ouranoupoli, Halkidiki (+30 23770 71 423) in order to obtain the Diamoneterion (visitation permit) which is valid for four calendar days.