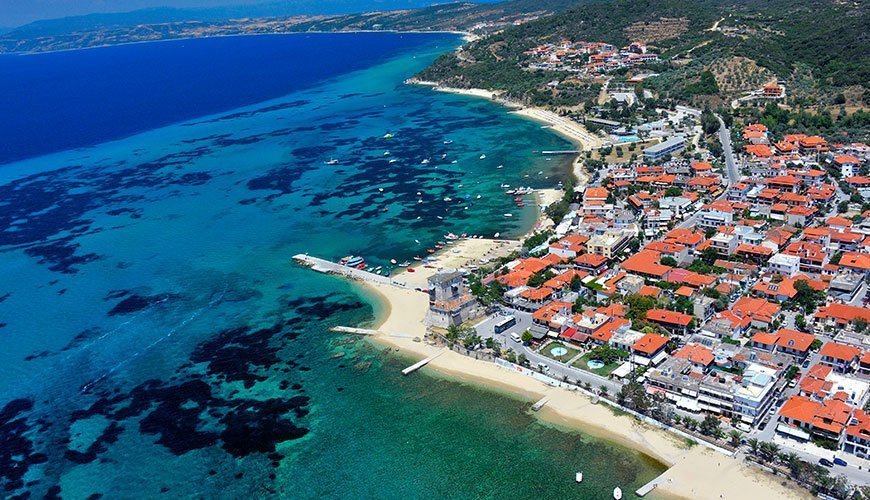 The long, winding road comes to an abrupt end 145 km from Thessaloniki and the airport, at the foot of an old tower. This is the end of the road, the border to the unique monastic state of Mount Athos, the Holy Mountain. This is the picturesque village of Ouranoupoli. Approximately a hundred houses huddling around a Byzantine tower, on the north finger of the Halkidiki peninsula in Northern Greece.

The gateway to Mount Athos, the port of passage for pilgrims and scholars alike who visit this unique monastic republic. The small village blessed with a mild climate (click here to see today’s weather), a clear blue sea and endless golden beaches.

The most memorable view of Ouranoupolis is from the top of the hill just after the town of Ierissos, at the point where the road crosses over from the north to the south side of the Athos peninsula. Pass the tiny whitewashed chapel of St Paul to the left, then a couple of sharp bends and the bay of Mount Athos unfolds in front of your eyes. To the left lies the village of Nea Roda, the place where Xerxes, the Persian King, cut a canal across the peninsula for his ships to pass. To the right by the shore lies the hamlet of Tripity, and further across the limpid sea the long island of Ammouliani, like a dark green lizard sunning itself.

At the foot of Ammouliani are the Drenia Islands, a group of uninhabited islets, some no more than tiny rocky outcrops, charcoals scattered by some giant hand in ancient times. Follow the yellow line of sandy coastline straight ahead, and far in the distance a tower rises from the unruffled blue sea, white houses sprawling away from it, bathing in the early morning sunlight. And even further in the horizon, like a giant background, the grey snow capped summit of Mount Athos appears in the early morning mist.

Because of it’s relative isolation Ouranoupolis has not been effected by mass tourism. It was part of Mount Athos until 1922, when approximately 50 families, Greek refugees from Asia Minor arrived under the auspices of the League of Nations, looking for a new home. The land was provided by Mount Athos and each family was given an one bedroom house, an arid plot of land and ten sheep. More families arrived four years later. Without a road to connect it to the rest of the world the village remained isolated and life was hard. In 1947 the locals took shovels and spades and cut a crude dirt-track road which ended the isolation and brought the very first adventurous tourists to the village.

The promenade on the west side of the village by the port, with it’s restaurants and cafes, is a wonderful place to leisurely spend the whole day, under the shaded foliage, by the sea, and watch the world go by. The little port is busy. Very early in the morning monks in black habits and pilgrims hurry to catch the boat for Mount Athos. Small wooden fishing boats arrive with the day’s catch. Later come the tourists, boarding large boats for the daily tour, eager to see the towering monasteries of the Holy Mountain from a distance. Finally smaller open boats with white canopies, start their regular trips to the islands opposite. Throughout the day private and hire boats leave for every direction, looking to discover a new beach, a deserted cove, to enjoy the warm sun and the clear blue sea.

They will be seen again in late afternoon, appearing through a sea of yellow and crimson, while the perfect red disk of the sun lowers itself far in the distance, reflecting a flaming stream on the calm sea. Everybody makes for the restaurants by the sea, to while the evening with friends, recounting the day’s exploits. At night, the lights of the restaurants along the promenade mirror on the limpid sea, forming mysterious flashing patterns. Far in the distance the lights of Ammouliani, the monotonous flashing of the lighthouse, the flickering lamps of the fishing boats, a wonderful, magical world out there. 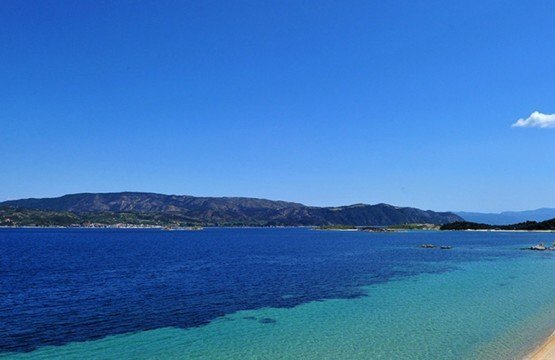 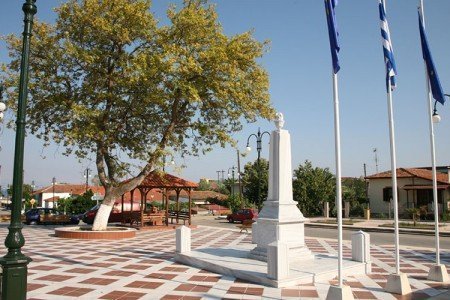 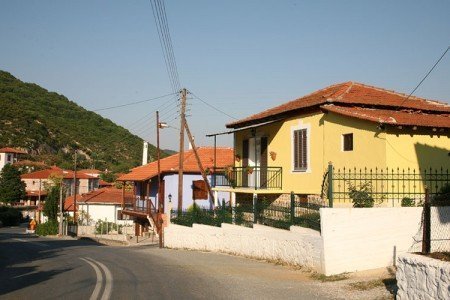 Stagira is the birthtown of Aristotles. It is found built on the foot the Stratoniki Mountain(Strempenikos), at an…