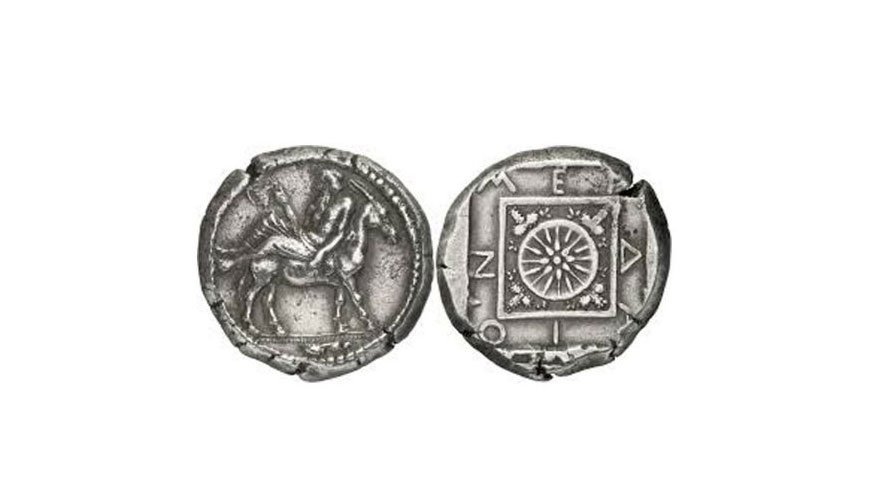 Thoukidides refers to Ancient Mendi as a colony of Eretria, which was founded in Pallini, the most western peninsula in Halkidiki. The exact year of its foundation its not given, however the presence of Eretris and Halkidis in Northern Greece dates within the framework of the BÉ’ colonization, the 8th century b.c.

The town owns its name to the aromatic plant peppermint (minthi), which is a particular type of peppermint and still grows in the area. The great economic growth, by the beginning of the 6th century, is confirmed by the circulation of currency and is mainly due to the exports of the famous Mendaios wine.

Mendi was the birthplace of the famous sculptor of the 5th century Paiogios, who did the statue of Niki in Olympia. During the 5th century the town was the most powerful ally in Athens, as far as the economics is concerned, defected though during the Peloponnesian War (431-404 b.c.) which caused its siege and loot by the Athenians. In the middle of the 4th century the town was taken by Philipos B and it gradually declined.

The position of the ancient town in the region of the Kalandra Community was identified by Leake in the 19th century, was confirmed by the topographic data of Thoukidides and Livios, by the survival of the place name Poseidi in the neighbor cape, and by many other excavating elements.

A systematic excavating research in the ancient Mendi was conducted during the years 1986-1994, by the XV RIS of Prehistoric and Classical Antiquities under the supervision of Julia Vokotopoulou. The main archeological site is a total area of 1200x600m located on the flat side and on the slopes of a piney hill, which reaches the sea.
In Acropolis, known as Vigla, which extends to the higher, southeast point of the hill, many clusters of holes were initially designed for storage. From the 12th to the 7th century b.c. their main content was ceramics. In the Glade, a trial cut revealed part of the wall. In the Proasteio to which Thoukidides refers to and which occupies the coastal area of the ancient town, parts of houses and streets were also discovered, which date from the 9th to the 4th century b.c. In the cemetery, which was traced on the beach of Mendi Hotel, 241 total entombments were investigated, mainly of babies and young children, which are dated by the end of the 8th beginning of the 7th to the end of the 6th century b.c.

The vessels were mainly written, with a vegetal and geometrical decoration, or graven, and consist of characteristic types of the ceramic style of Halkidiki. The sanctuary of the ancient town was found to the sandy, flat cape Posidi, 4km west of Mendi. The buildings, which have been excavated, include the temple of Poseidon, of the 5th century, the identification of which is due to some graved inscriptions on the vessels.

The arched building in Posidi, is one of the most ancient sanctuaries in Greece and the unique with the building of the Dark Centuries for worship use from North Greece. The results of the excavations in the ancient Mendi were considered particularly important as they showed that there was a permanent settlement with intense Euboic influences and it was founded there by the end of the 12th century beginning of the 11th century b.c.
The character of this premature foundation cannot be defined yet, however the new data are valuable because we learn more things about the Euboic colonial activity in the region of Halkidiki, and furthermore about the commercial relations which were developed in the North Aegean during the Dark Centuries. 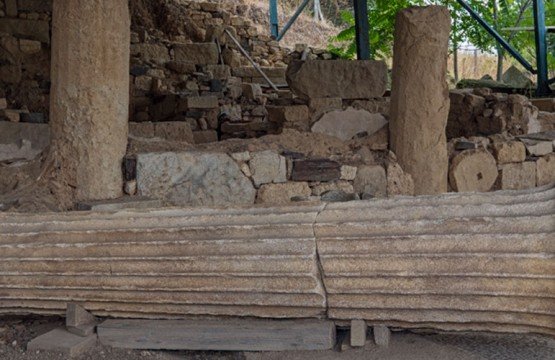