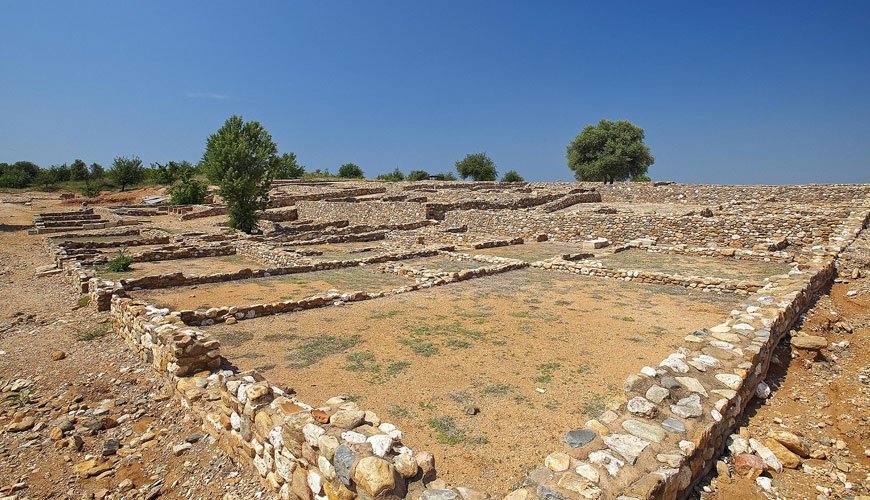 Olinthos was for a century, the most important town of Halkidiki. Its foundation is lost in the mythical years. Some archaeological findings show that in the town’s position used to be a significant prehistoric settlement, which was the town of the classical years. According to the mythology Olynthos was the son of Strymonas, King of Thrace and he was killed in a lion hunting.

After his death his brother Vraggas build Olynthos in his honor. According to another story Olynthos was the son of Hercules. There are some records for the town which date at the 7th century b.c., when the Vottis conquered it.

In 480 b.c. the Persian General Artavazos conquered Olynthos and destroyed the town almost completely. The habitants he arrested were then slaughtered in the swamps, which are located between Olynthos and Potidaia.

After its ruin he gave the town to Halkidis and thus Olynthos became a Halkidian town. After the Persian wars Olynthos became a member of the Athenian Alley. In 440 b.c. he defected form the Athenians and at Perdikas call many coastal towns became neighboring to Olynthos. Thus, Olynthos was so reinforced, according to the historic Xenofon, that could keep a military force of 20,000 men.

The foundation of the Common of the Halkidis, that is the political union of 32 towns of Halkidiki under the aegis of Olynthos, it contributed to the further development of the town. During the kingdom of Amyntas B (393-369 b.c.) the dominance of the town expanded to a part of Macedonia, in which Pellas was also included. In 379 b.c. the town was taken by the Lacedaeomonians and broke their Common but very soon Olynthos was set free, reestablished the Common and became so powerful that all the great powers of Greece aimed at its alliance. Philipos of Macedonia in order to detach Olynthos from the influence of the Athenians gave away the fertile land of Anthemounda (current Galatista) and for its sake took over Potidaia. The habitants of Olynthos understood that his behavior was not unselfish so in 352 b.c. broke up the alliance with the Macedonians.

Because the habitants of Olynthos refused to surrender his brother Arridaios, who took refugee to their town, Philippos set out his army against the towns of Halkidis. It is said that the result of this crusade was the disaster of 32 towns of the Common. Later on he fought Olynthos, which was desperately asking for help from the Athenians. The famous Athenian speaker and politician Dimosthenis announced the Olynthians speeches inviting his town to send help to Olynthos. But when the main Athenian power began, Olynthos took a fall into Philippos hands by betrayal (348 b.c.). The towns fortune had been predetermined by the times of its siege, when Philippos answered to the Olynthian representatives who visited him in order to make peace that either them should be living any more in Olynthos or he in Macedonia. So, after its loot it was completed destroyed. The habitants who were captured were then sold as slaves. Among them were Philippos brothers, Arridaios and Menelaos, who were transferred to Pella and then were killed.
Olynthos wasnt rebuilt after 348 b.c. Most of the habitants of Olynthos who managed to survive, established by Kassandros in Kassandria in 315 b.c. Kassandros was then accused by his political rivals of rebuilding the enemy of Macedonians, Olynthos from which many personalities came from. Indicative we refer to Kallisthenis, nephew of Aristotle and classmate of Alexander the Great, the historians Strattis and Efippos, who attended the expedition of Alexander, the Great.

Ancient Olynthos, as weve already said, is located at the heights, east of the village. This area is enclosed and the entrance is located at the Southwest base of the heights, where the guardhouse is located. You can go by car till the entrance as there is a motorway. Within the archeological site you can only walk. The towns position was identified by the last century. The habitants of the region named it Tower (name which is known and used until today by the local people), because of a Byzantine tower, which secured the metohi of Kastamonitos Monastery of Mount Athos. Only the foundation of the tower is found today at the south part of the town. During the years 1928, 1931, 1934 and 1938 many excavations took place by an American archeological delegation under the supervision of Professor David M. Robinson. The conclusions of the excavations have been published in twelve big books, which represent to the archeologists a basic work for the study of the ancient Greek art.
However, one of the most important offers of Robinson is the thorough description he gave us regarding the town planning of a town of the classical era. As weve already mentioned before, Olynthos was ruined in 480 b.c. by the Persians. Around 440 b.c. thousands of new habitants were added to the existing ones, who all came from the coastal towns of Halkidiki.

Having in mind all of these historic data and furthermore the excavating data, we can conclude to the following: the archaic town, which was the continuity of the prehistoric, was located in the south hill, where the roads followed the inclination of the ground and crossed with others. In this part of the town we cannot say anything about a regular town planning. The north hill seems to have been the area of the new mass inhabitancy of the Halkidis. Its evaluation was led by a complete rational thought. An area of about 600x350m was divided into parallel and upright roads.

Seven parallel avenues, with direction from the North to the South, from 5 7 meters width, cross with right roads of 5m width. The blocks, which are formed, are 35,40m and 86,34m by side, that is 120×300 feet (1:2,5). To the south boundary of the new settlement some the avenues have a direction towards the southeast, indicative route of the communication route between Olynthos and Mykivernas, which after 421 b.c. became the harbor of Olynthos.

The preciseness of the town planning of Olynthos help us understand how the Hippodameios town-planning system was applied. Every block usually included ten residences, which had an inside court and except for the necessary rooms, auxiliary rooms with running water and a drainage system.

The impression the town gives is less interest than that of the bigger modern cities: the houses are humble, there arent any communal areas and everything is modest, apart for some villas, which are located at the outskirts of the town. The town was built with mud-brick walls, on which the first houses nearly touched it. The towns market is situated in a space with a stoa, which was located at the point where the old settlement meets the new one.

The finds of the excavations are kept in the museums of Thessaloniki and Polygiros. 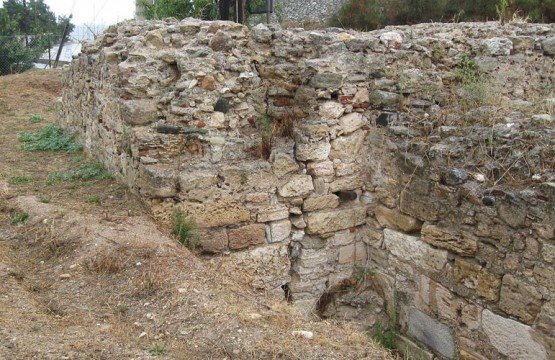